Beverley Community Choir was established as part of Beverley Folk Festival’s outreach and community programme in May 2003. The festival team worked with Yorkshire-based vocalist Ali Bullivent, to develop and promote a six-week community choir project, with the aim of providing an informal and fun opportunity to bring together those who enjoy singing, with no auditions or need to read music.

The initial sessions attracted a healthy number of enthusiastic singers, with Ali’s lively and inspiring leadership developing confidence in the group from each week to the next. During the first few sessions, Ali shared the news that the choir would be giving their first performance at Beverley Minster during Beverley Folk Festival at the end of the project, and the singers burst into excited applause! Everyone was invited to join in the performance (but not obligated) and the remaining sessions saw the group develop their repertoire of popular, world and traditional acappella music, with some of the singers even signing up for solo parts. 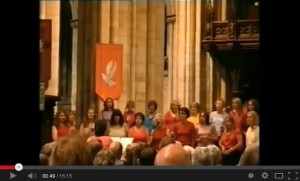 The Beverley Minster concert was a triumph and the enthusiasm, camaraderie and friendships within the group were destined to continue. Over the next year, Beverley Folk Festival employee Hannah Smith supported the choir through their transition into an independent community group, establishing a committee and administration processes. The choir continued to grow during this time and moved practice venue twice to accommodate their increasing attendance.

During the initial six week project, Ali held a short session each week for those members interested in learning more about leading choirs. These sessions included leadership techniques, sourcing repertoire, choir Q&A etc, and a handful of choir members attended each week. Two of those who attended were Beverley residents and vocal practitioners Sue Murray and Jennie Beasty. These two shared the leadership for a short while, before Sue Murray became sole leader. She has led the choir from strength to strength since the initial project and continues to inspire and engage the group with her lively leadership.

The choir has given a range of performances over the last few years at local charity events, Beverley Folk Festival and provided support for touring artists, each time impressing audiences with their harmonies and arrangements.

2013 was a momentous year for the choir as they marked their 10th anniversary with a lively ceilidh, celebratory singing and a sumptuous birthday cake. It is a delight to see the membership includes a handful who have who have been on the choir’s journey since its inception, with lots of new members welcomed into the group over the years, each providing friendship and support to others which stretches far beyond the weekly choir sessions.

With an overflowing waiting list and a pro-active committee steering the choir forward, their musical future continues to look very bright with the original ethos remaining today: that singing together is natural and above all fun.

This site uses functional cookies and external scripts to improve your experience.

NOTE: These settings will only apply to the browser and device you are currently using.